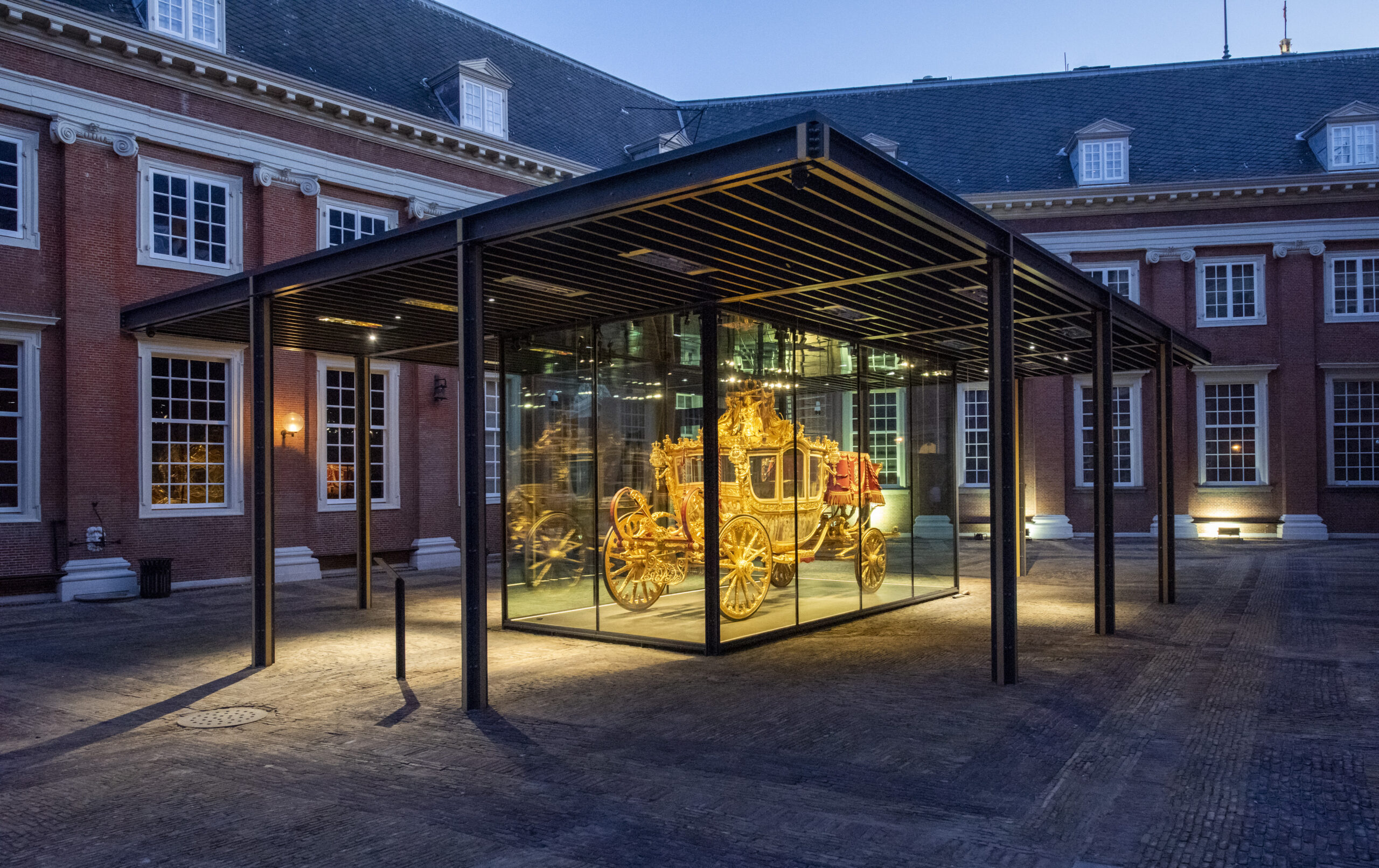 Gold of the Golden Coach originates from Suriname

UNKNOWN PROVENANCE INVESTIGATED BY THE AMSTERDAM MUSEUM, VU AMSTERDAM AND THE NETHERLANDS INSTITUTE FOR CONSERVATION+ART+SCIENCE+

Together with the Vrije Universiteit Amsterdam, Netherlands Institute for Conservation+Art+Science+ (NICAS) and Naturalis Biodiversity Center, the Amsterdam Museum conducted research into the origin of the gold of the Golden Coach. Where the gold leaf with which the coach is gilded came from has long been unknown. In an extensive study, the gold’s composition was compared with samples from Suriname and South Africa. Now the mystery has been solved: the gold appears be of Surinamese origin.

From June 18, 2021 to February 27, 2022, the Golden Coach was on display at the Amsterdam Museum following a restoration that lasted more than five years. Various narratives were highlighted in the accompanying exhibition. Hundreds of cultural-historical objects provided a multifaceted picture of the history and use of the Golden Coach, as well as the discussions surrounding this iconic mode of transport. The exhibition also devoted extensive attention to the Golden Coach’s construction. The coach is made of Javanese teak wood, parts of which are painted. Other parts of the wood are gilded with gold leaf. The coach owes its name to this gold leaf. But where the gold came from remained unknown until now. In the exhibition it was pointed out that, despite the prominent role this gold plays on the coach, its provenance has never been investigated. Documents from the end of the 19th century indicating where the gold came from have not surfaced, and potential archival sources have since been lost. The provenance could only be investigated using modern techniques.

Annemarie de Wildt, curator at the Amsterdam Museum, extensively researched the Golden Coach in the lead-up to the exhibition. She found it regrettable that the provenance was unknown, and also could not be traced during the five-year restoration. “The makers and initiators of the Golden Coach prided themselves on the fact that the gift to the new monarch, Wilhelmina, was meant to represent the entire Kingdom of the Netherlands at the time. The coach therefore incorporates flax from Zeeland, leather from Brabant, wood from Java, and ivory from Sumatra. Suriname, which was then part of the Kingdom of the Netherlands, did not seem to be represented. That raised questions for myself and many others. South Africa was a major exporter of gold around 1900, and the region had strong ties with the Netherlands, but in Suriname it has been told from generation to generation that the gold comes from there. Which is frankly enough reason to investigate the origin of the gold.” De Wildt contacted the Cultural Heritage Agency and the Vrije Universiteit Amsterdam and launched an investigation.

Gareth Davies is professor of Petrology – a field of geology which focuses on studying the composition of rocks and the conditions under which they are formed – at VU Amsterdam. Davies and his team started in the spring by comparing a small piece of gold from the Golden Coach, provided by the Dutch Royal Stables, with samples of gold from different regions in South Africa and Suriname, obtained from Naturalis. Davies: “To compare gold, we look at the lead isotopes formed by the radioactive decay of the elements uranium and thorium. These vary by region. A clean sample is needed for such a comparison. But the gold of the Golden Coach contained numerous lead particles that came from the air pollution to which the coach has been exposed over the years, such as exhaust fumes from gasoline. Paint and glue containing lead also complicated things. All those billions of particles of lead had to be removed. It was like plucking a single grain of sand out of a pool filled with sand, a huge job that took more than four months. In addition, our work was made extra difficult because we only had a small sample at our disposal. Gold leaf is 1 micron thick. That’s 100 times thinner than a human hair.” Nevertheless, Davies and his team managed to compare the lead concentration of the coach’s gold with samples from the different regions. It became apparent that the gold of the Golden Coach differs greatly from the South African samples. “After careful analysis, we can say with certainty that the gold of the Golden Coach did not come from South Africa. From a historical perspective, South Africa or Suriname are seen as the only probable options. The results of our research fully support the conclusion that Suriname is the country of origin of the gold on the Golden Coach,” says Davies.

After gold was discovered in Suriname in 1876, large-scale gold mining developed in the following decades. A railway was even built to reach the sources south of Paramaribo. It is quite probable the gold of the coach came from that area. Davies: “At this time we can show that the composition of the gold of the Golden Coach most closely resembles the sample from a gold mine on the Suriname River, near the Brownsberg, in the Brokopondo region.” De Wildt considers this to be a logical conclusion, because at the end of the 19th century, when the Golden Coach was constructed, a large amount of gold was being mined in this area. “It’s wonderful that there are now research methods which can confirm the legend that the coach’s gold comes from Suriname.” The team at VU Amsterdam would like to investigate exactly which gold mine in Suriname the gold comes from, but to do so requires hundreds of samples from the region. It will also take months of work to analyze all the samples. The team also wants to evaluate gold deposits from other parts of the world to help museums and collectors understand the provenance of other gold artifacts. This of course requires financing.

Inquiry into the Golden Coach

The investigation of the Golden Coach’s gold is not the only research that the Amsterdam Museum has initiated as part of this project. Prior to and during the exhibition, the museum also examined public sentiment about the Golden Coach and the future of the vehicle. Using a specially developed mobile research installation, the museum traveled to all twelve provinces of the Netherlands to survey Dutch people regarding their knowledge, memories, and opinion of the Golden Coach. In addition, the Amsterdam Museum commissioned the research agency Motivaction to conduct a quantitative study and asked exhibition visitors to share their views. These studies revealed that the debate around the Golden Coach may at first seem polarized, but that most Dutch people in fact agree: they want the ceremonial vehicle to be preserved and on display. Opinions differ, however, about the ideal way to achieve this. “The role of museums is changing. As a museum, you can’t just exhibit a controversial object. You also need to facilitate societal discourse and stimulate it further. This means offering space for new perspectives, which helps to get dialogues going, and doing research,” explains Margriet Schavemaker, artistic director of the Amsterdam Museum.

On Monday, September 12, 2022, the Amsterdam Museum will host a symposium to present the findings of all the research it has undertaken with its partners, or had carried out. This includes information about the gold of the Golden Coach and the general sentiment about the coach itself. The free symposium is open to everyone and will take place in the main hall of Pakhuis de Zwijger in Amsterdam.

The investigation took place under the direction of the Netherlands Institute for Conservation+Art+Science+ (NICAS), an interdisciplinary partnership between the Rijksmuseum, University of Amsterdam, TU Delft, and the Cultural Heritage Agency (RCE).