Uncovering Hidden Features Inside Art Objects in an Interactive Environment

Is it a shoe? A bottle? Or, a whale? As it turns out, all three: a bottle in the shape of a shoe in the shape of a whale (Fig. 1). The exact use of this rather peculiar object remains an intriguing question. Was it actually used as a bottle, or is the removable tail-shaped cork merely decorative? Was it perhaps made by a shoemaker as a masters test before they were allowed to enter the cobbler’s guild?

This eyecatching object can be found in the Rijksmuseum’s special collections, where it has been on loan from the Koninklijk Oudheidkundig Genootschap since 1885. Questions about the object’s making process, its use, and internal features made it the central case study of the IntACT project, which was funded by a NICAS small project grant and ran from January till June 2022.

Investigations into cultural heritage objects are most often focused on external features. While this is not surprising, simply due to ease of access, the interior often holds as many secrets at least! From traces of toolmarks that inform us about studio practice and making processes, to fingerprints that facilitate authenticating objects: unveiling an artwork’s internal structure may help uncover a myriad of aspects of an artwork previously hidden from the eye.

In the past years, X-ray Computed Tomography (CT) has been used to visualise the interior of objects in 3D. For example within the NICAS and NWO funded Impact4Art project by CWI and Rijksmuseum. A CT scan is comprised of hundreds of individual X-ray images taken from different angles, which are then combined using tailored reconstruction algorithms into a 3D representation of the object. Such datasets are often investigated by slicing through the 3D representation, providing the researcher with a 2D image as if the object was cut through at a given point (Fig. 2). This image, a black and white image of relative densities in the object, allows us to identify and investigate internal features.

Fig. 2: Visualisation showing the representation of a CT scan as a stack of 2D-slices through an object. Visualisation by: Paul van Laar

A drawback from analysing CT data using such slices, is that most museum professionals are trained to examine objects in 3D, rather than 2D. It can be hard to interpret and extract certain features from 2D slices and directly relate them to the 3-dimensional object.

Therefore, within the IntACT project, we set out to solve these issues by providing a better way of inspecting CT data for museum professionals. To accomplish this, we wanted to:

By doing this, the data becomes more easily and intuitively explorable. That is to say, the object now exists virtually in 3-dimensional space, with its real colour information on the outside, and the CT data on the inside! This facilitates associating observations on the exterior surface to features in the internal CT data – and vice versa.

The project started out with collecting datasets of three objects from the Rijksmuseum collection. CT scanning was conducted at the FleX-ray lab at CWI and a handheld Artec Spider surface scanner from the Rijksmuseum was used for the 3D scans. The development of an easy-to-use interactive visualisation environment could afterwards take off.

There was no standardised method available yet for combining CT scans and 3D surface scans tailored to cultural heritage. Many applications with similar features have a medical goal and did not conform to our specific wishes. Therefore, we decided to create one ourselves within the open source and free 3D graphics software Blender.

There are three data representations that come into play: the 2D slices of the CT scan (Fig. 3a), the 3D representation of the CT scan (Fig. 3b), and the 3D coloured surface scan (Fig. 3c). The CT scan and the surface scan are first registered to one another, to make sure they are aligned. After this alignment, with the click of a couple buttons a custom environment in Blender is set up that allows the user to slice open an object in any direction. Moreover, the three data modalities can be turned on and off on demand. This makes it possible to identify certain features on the surface scan, cut the object open at that exact spot and then switch to the slice representation showing the interior of the object at that location. 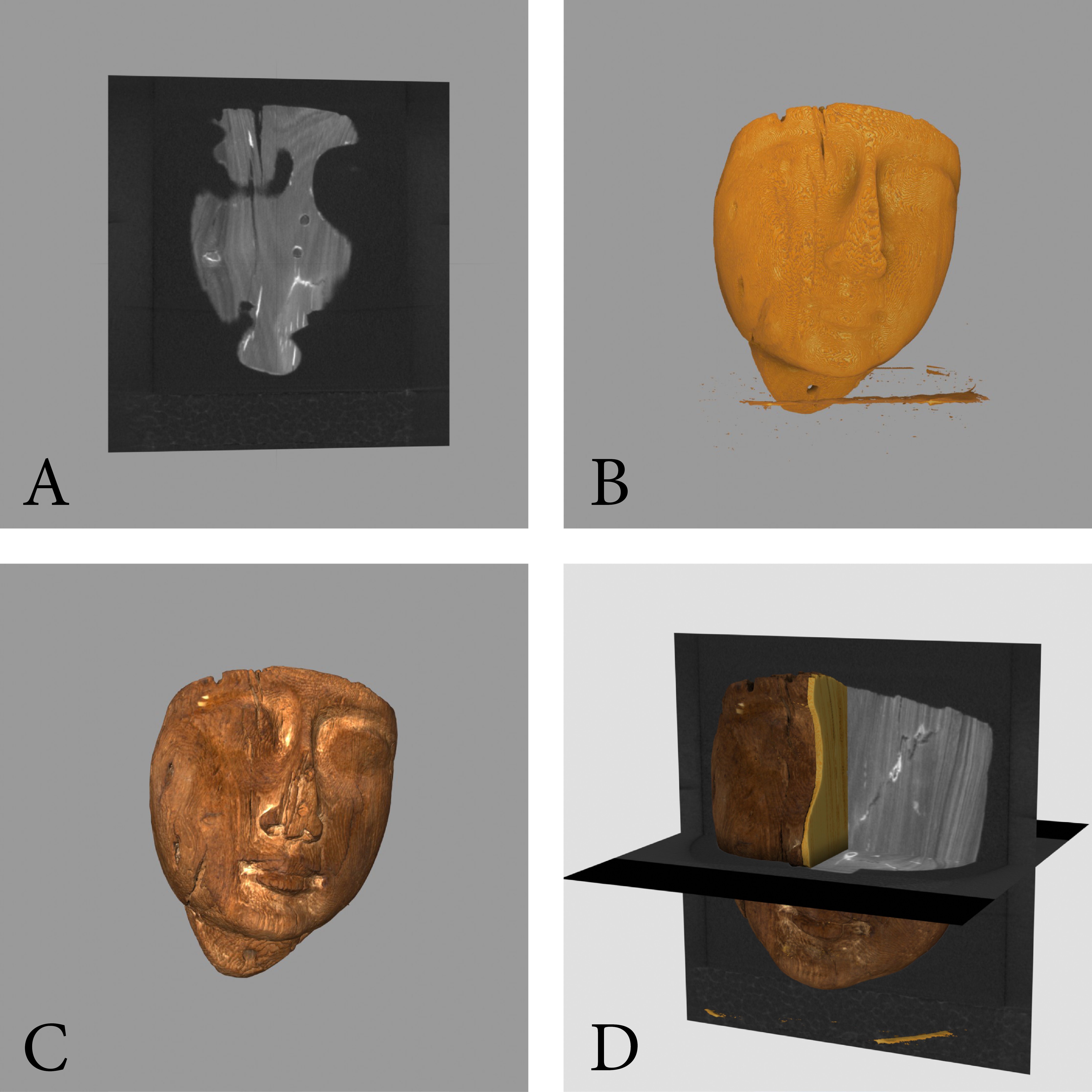 Fig. 3: Visualisation showing 3 different data modalities, and a situation in which they are aligned to one another. (a) 2D slice through CT-data; (b) 3D representation of CT-data; (c) 3D coloured surface scan; (d) Aligned data modalities, sliced open, allowing inspection of the object’s wood structure and year-rings. Visualisation by: Paul van Laar

As the results of a visualisation-based project are easier shown than described in words, we include a visualisation here that was made using the tool. As you can see, we can open up the peculiar bottle/shoe, revealing (among other things) that it is in fact fully hollow, and may very well have held liquid at some point.

The blender plug-in and protocol as a whole were written with free access and ease-of-use for any museum or institution in mind. It will therefore be free to use, with an accompanying tutorial such that anyone can examine their CT data and 3D surface scans in the above described manner.

Visualisation showing aligned CT and 3D surface data of the “Bottle in the form of a shoe”. Render by: Paul van Laar