We would like to invite you to the second seminar in the Technical Art History Series: Digital Imaging Methods for Cultural Heritage. This seminar consists of two lectures given by Aleksandra Pizurica (Gent University) and Geert van der Snickt (University of Antwerp).

Please join us for these lectures on Tuesday May 25, at 15.00-17.30 hrs CET.
By scanning the QR code on the poster or by clicking on the button below, the registration form will open in your browser.

The Venice Center for Digital and Public Humanities, together with CWI Amsterdam and the Netherlands Institute for Conservation+ Art+ Science+, are organising a short series of lectures on object-based research, including virtual letter unfolding, digital art restoration, 3D modeling and software for the analysis of diverse data forms, with the aim to stimulate collaborations and scientific discussion on Cultural Heritage challenges in the digital world.

Art conservation relies increasingly on multidisciplinary research including new sensing technologies and techniques for analysing multimodal data. In this talk we address important challenges for computer vision systems in automatic detection of cracks and paint losses as well as in overpaint detection and virtual restoration. We shall present our results in applying AI techniques to these problems, making use of multimodal acquisitions of paintings. The focus will be on the case study of the Ghent Altarpiece and on the experience gained from a multidisciplinary collaboration in the framework of the recent major research and conservation campaign conducted on the Hubert and Jan Van Eyck’s masterpiece.

Aleksandra Pizurica is Professor in statistical imaging modelling at Ghent University, where she is also leading the research group Artificial Intelligence and Sparse Modelling. Her research is at the intersection of image processing, machine learning and information theory, and has been reported in more than 350 scientific publications including more than 80 journal papers. She served as an Associate Editor for the IEEE Transactions on Circuits and Systems for Video Technology (2016-2019) and an Associate Editor and a Senior Area Editor for the IEEE Transactions on Image Processing from 2012 to 2016 and from 2016 to 2019, respectively. In 2015, she received the bi-annual Scientific Prize “de Boelpaepe” from the Royal Academy of Science, Letters and Fine Arts of Belgium for her contributions to statistical image modeling and applications to digital painting analysis.

In this work, we discuss how non-invasive macro scale imaging experiments had a direct impact on the choices made during the conservation treatment of the Ghent Altarpiece by the KIK-IRPA. As part of an accompanying extensive technical study, the entire surface of the panels of the reverse side of the outer wings and the lower register were subject to chemical imaging experiments. In particular, the elemental maps demonstrated how the paintings had been largely overpainted during an early restoration campaign. The extent of this intervention had never been detected with traditional imaging techniques such as X-Ray Radiography and Infrared Re ectography. In addition, MA-XRF maps
established unequivocally the relative good condition of the original scenes by visualizing the paint losses in the concealed original paint. This finding sustained the much debated choice for removal of the overpaint. A newly developed imaging technique, Macro X-ray Powder Diffraction was field-tested during the second phase of the treatment, and supplied preliminary results that show promise for the upcoming third and last phase, focusing on the upper register with crucial panel such as the Deity and Mary. In the meantime, MA-XRF imaging on other works by Van Eyck, such as Canon Van der Paelen and the portrait of his wife Margaretha, revealed new insights in the buildup of the composition.

Geert Van der Snickt received his Master in Conservation-Restoration in 2003 at the University of Antwerp. Shortly after, he affiliated with the Department of Chemistry of the same institute. In 2012, he successfully defended a PhD thesis entitled: “James Ensor’s Pigments Studied by Means of portable and synchrotron radiation-based analysis: identification, evolution and degradation”. From 2014 to 2018 he held a Chair on Chemical Imaging for the Arts within the same group. In 2019, he returned to the Conservation- Restoration department by accepting a position as tenure track professor. As a cultural heritage scientist, his work focuses on synchrotron radiation-based analysis and the application of chemical imaging techniques for non-invasive characterisation of paintings and art materials. 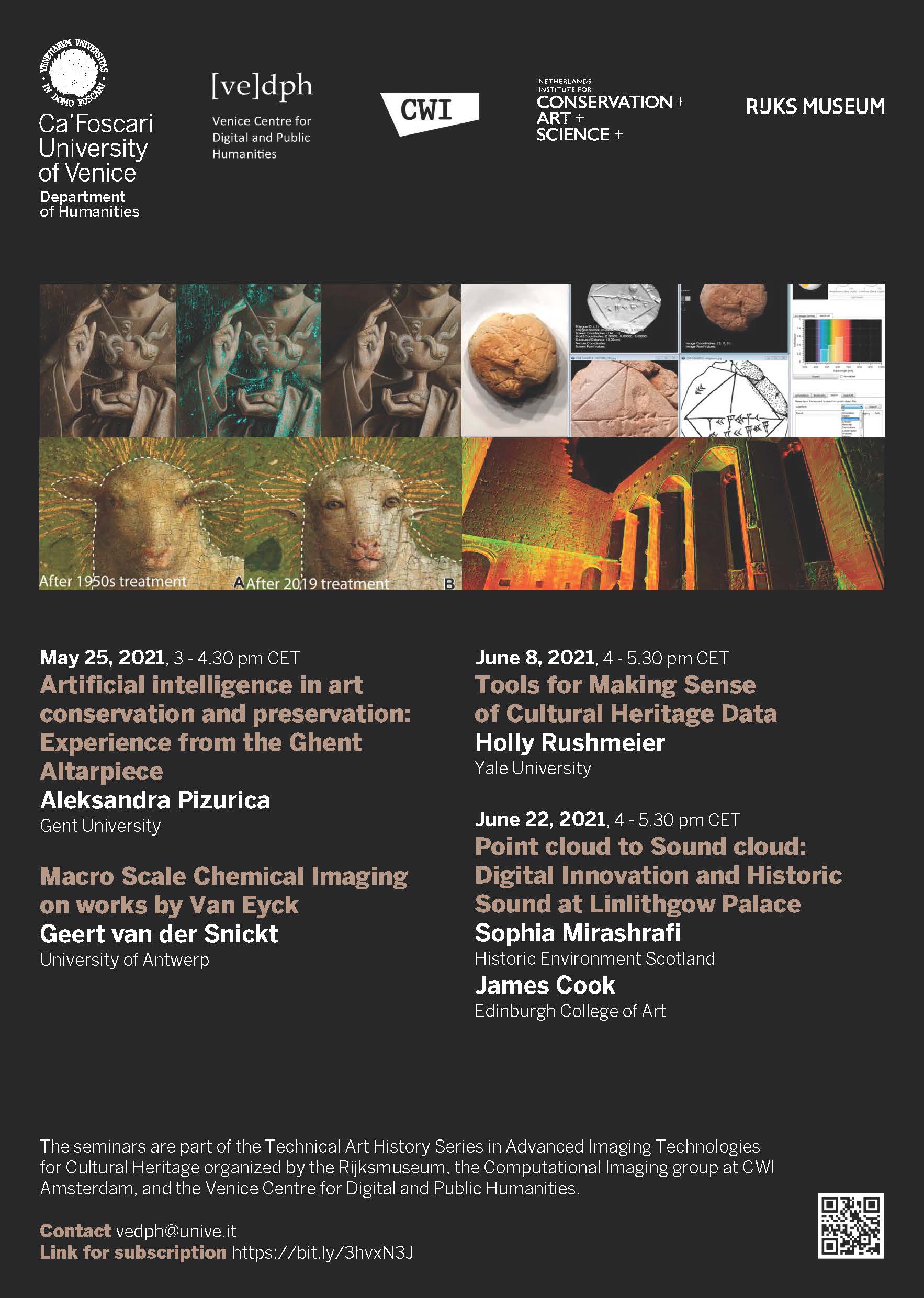