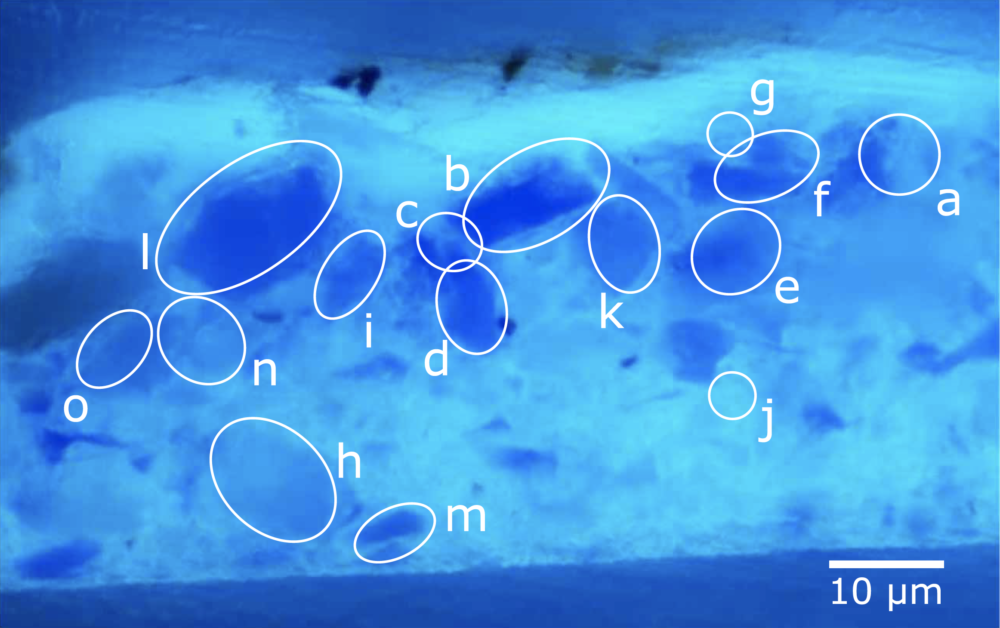 Ultramarine blue, one of the most valued natural artist’s pigments, historically was prepared from lapis lazuli rock following various treatments; however, little is understood about why certain treatments were chosen or how to distinguish the treatments used to obtain a specific pigment used on paintings. A new study, resulting from the NICAS Partner Project Ultramarine disease, shows how x-ray absorption spectroscopy can be used to gain new insights into the treatments used to obtain pigments used on historical paintings.

Ultramarine blue is a pigment composed of the blue mineral lazurite, the most prominent component of the semi-precious stone lapis lazuli. Historically, the most commonly documented source of lapis lazuli is modern-day Afghanistan. Highly valued for its vibrant color, ultramarine has been used in artworks for centuries, and it was eventually produced synthetically for the first time in the early 19th century. Lazurite was extracted from lapis lazuli as early as the 13th century. Motivated by a desire for the deepest blue hue, pigment preparation recipes called for intricate extraction methods to isolate lazurite from accessory minerals of lapis lazuli. Some recipes instruct heating the lapis lazuli rock with fire or until “red hot” before grinding into a powder and extracting lazurite.

Lazurite has a cage structure. The color of lazurite has been attributed, in particular, to the sulfur radical species trapped within the cage where di-, tri-, and tetrasulfur radicals are proposed to contribute to various hues. Motivated by previous reports, this study seeks to determine whether sulfur chemistry—as influenced by heat treatment—provides a unique marker for the historical treatment of lazurite, or ultramarine, used in paintings.

The study uses x-ray absorption near-edge structure (XANES) spectroscopy, in both microbeam and full-field mode (FF-XANES), at the sulfur K-edge to make sulfur speciation within the lazurite crystals measurable and variation in these species observable. Some of the findings of the study include that sulfur speciation within the cage structure is dependent on the temperature of the rock heat treatment. In addition, it was observed that the overall blue color of the lapis lazuli rock intensifies with heating. It was also observed that cutting, grinding, milling, and separating the lazurite via the popular pastello method – a traditional extraction method that involves kneading ground lapis lazuli rock in a ‘dough’ known as ‘pastello‘, often comprising resins, beeswax, and oil – were easier for heat-treated rock than for unheated rock, implying that other physical or chemical changes arise with heat treatment and are worthy of further study.

The new study gives new information about the pigment that is valuable for art historical research, elucidating the use of the most highly valued pigment throughout history. Furthermore, it can give new insights into the the reasons why some ultramarine-based paints (e.g., mixed with a drying oil) are known to show ‘ultramarine disease’, a degradation phenomenon that markedly changes the aesthetic and integrity of the artwork, showing apparent color changes at the surface. This susceptibility may very well be linked to the specific treatment methods to obtain the pigment.

The full article can be accessed here.